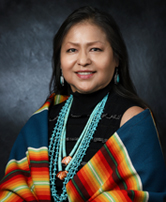 Theresa Becenti-Aguilar was born and raised on the Navajo Nation. Theresa’s roots are planted deep in the rural community called Coyote Canyon, N.M.

Theresa was appointed by former Governor Bill Richardson in July 2010 to the five-member New Mexico Public Regulation Commission and was elected in November 2010 by the voters of her district to serve a full four-year term.

Constituents from Northwest New Mexico once again elected Theresa in November 2018 to serve another term as Commissioner for District 4, of the New Mexico Public Regulation Commission. She is both honored and humbled by the voters’ faith in her.

Theresa began her career as an intern with the Federal Bureau of Land Management. Beginning in 1989, she worked for former New Mexico Attorney General Tom Udall for nine years, and then for the next eight years served as Congressman Udall’s Constituent Services Representative for Tribal Relations. In November 2006, Theresa was appointed as the first Native American Liaison for the five-member Public Regulation Commission. Her experience encompasses critical Tribal issues, and she works tirelessly to promote the general welfare for all citizens. Perhaps most importantly, Theresa is dedicated to bringing to government the qualities of honesty, integrity, ethics, and vision.

Theresa believes her leadership will support upcoming generations despite the challenging times. She shows a remarkable aptitude for finding common ground and she works diligently and with discretion. Theresa’s work with the Public Regulation Commission has demonstrated her unique ability to bring her constituent’s concerns to the process of regulating utility, telephone, and insurance companies.

Theresa’s qualities as a compassionate leader with a strong work ethic and a concern for the needs of her constituents have helped build better working relationships among all the people she meets. Her commitment to public service is a commitment for better future.

Theresa Becenti-Aguilar is the Commissioner of the 4th District of the Public Regulation Commission.

District 4 is shown as the blue area on the map below.