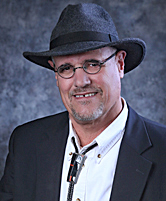 Steve Fischmann joined the New Mexico PRC as District 5 Commissioner in January 2019. He represents the southwest quarter of the state.

Steve is passionate about providing consumers the lowest possible utility costs while transitioning as rapidly as possible to a clean, carbon free energy environment. He sums it up this way. “We are fortunate to live in times when renewable energy is often the cheapest energy and new technologies are expanding our capabilities each and every year. There is no more exciting place to be than the PRC for advancing our economy and the unfolding energy revolution.”

Steve has a history of public service since moving to New Mexico in 2004. Most recently he co-chaired a coalition that successfully passed legislation to eliminate or put interest cap limits on rip off small loans. He also co-founded the Children’s Reading Foundation of Dona Ana County to promote early childhood literacy and served on the board of Conservation Voters New Mexico, a leading environmental advocacy group at the New Mexico Legislature.

As a State Senator from 2009-2012, Steve developed and successfully sponsored legislation requiring prompt no cost/low cost delivery of state and local government records to any citizen requesting them. He successfully sponsored legislation promoting greater collaboration between Universities, state government and private enterprise in developing new technologies to spur our economy. Steve also chaired the legislative Science and Technology Committee where he developed strong expertise in energy policy.

Prior to his election to the State Senate, Steve co-founded the Southwest Energy Alliance and helped spearhead work on Dona Ana County land use issues.

Steve holds an MBA and a BA in English and Political Science all from the University of California Los Angeles. He is married to Gail Katayanagi, has two sons, and currently resides in Las Cruces.

Stephen Fischmann is the Commissioner of the 5th District of the Public Regulation Commission.

District 5 is shown as the red area on the map below.