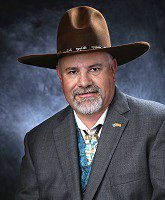 Jefferson L. Byrd was elected and sworn into office to his first term as a Public Regulation Commissioner representing District 2 on January 1, 2019. Growing up on his family’s ranch, he graduated from Mosquero High School in Quay County and went on to attend New Mexico State University, where he obtained a degree in Agricultural Engineering. While attending NMSU, Jeff met his future wife Suzanne, a math teacher at Logan Public Schools and a registered Professional Civil Engineer. They have been blessed with two sons, Noah and Zachary. Jeff is a devout Christian, husband and father.

Jeff’s work experience is broad, working as an environmental engineer on a Geoprobe rig installing micro-monitoring wells at a depth of 18 to 20 feet as a geologist and completing site delineation plans of numerous industrial sites from New York to California. He has installed and completed site remediation systems at various sites around the Southwest. Jeff is also a cattle rancher and works as a wind-miller on his own and neighboring ranchers’ wells.

During his term, Jeff has worked with utility providers to ensure citizens are protected and have reliable utility service. He is thoughtful in his decisions and knows that his vote not only impacts his constituents but all citizens in our diverse state. He recognizes the responsibility in balancing and diversifying energy production while moving towards energy independence. Jeff works every day to represent New Mexico families and businesses to ensure access to reliable and affordable utilities and promote energy independence for our state.

District 2 continues to diversify our state’s energy reliance by expanding our renewable energy source with the Sagamore wind project, a 522MW wind farm which was just completed in Roosevelt County. This project is the largest wind farm in the state and has created jobs, diversified our energy portfolio, and is expected to generate electricity for approximately 193,000 households.

Jeff Byrd is the Commissioner of the 2nd District of the Public Regulation Commission.

District 2 is shown as the green area on the map below.